For the two year anniversary of this blog, we’ll review Twitter use at the STC Summit conference. Twitter use among attendees continues to grow dramatically. Although this post only looks at tweets during the dates of the Summit (May 19-24), use of the #stc12 hashtag began months before the conference and continues today.

Unlike previous years where I put a great deal of manual effort into compiling the tweets by pulling from my #stc10 and #stc11 RSS feed, this year I’ve relied on the suggestions and work of colleagues Kevin Cuddihy of STC and Karen Mardahl. Thanks also to Rick Sapir for his suggestion to use twdocs.com to collect the tweets.

Kevin Cuddihy published a Wordle of the most commonly used tweets at the conference in his Summit Blog post. Here’s the Wordle he compiled:

As Kevin has noted, you can see that a good amount of the Wordle is composed of usernames.

Karen Mardahl (@kmdk) uses The Archivist to compile an analysis of the tweets. The two graphics and lists below are taken from her archive. 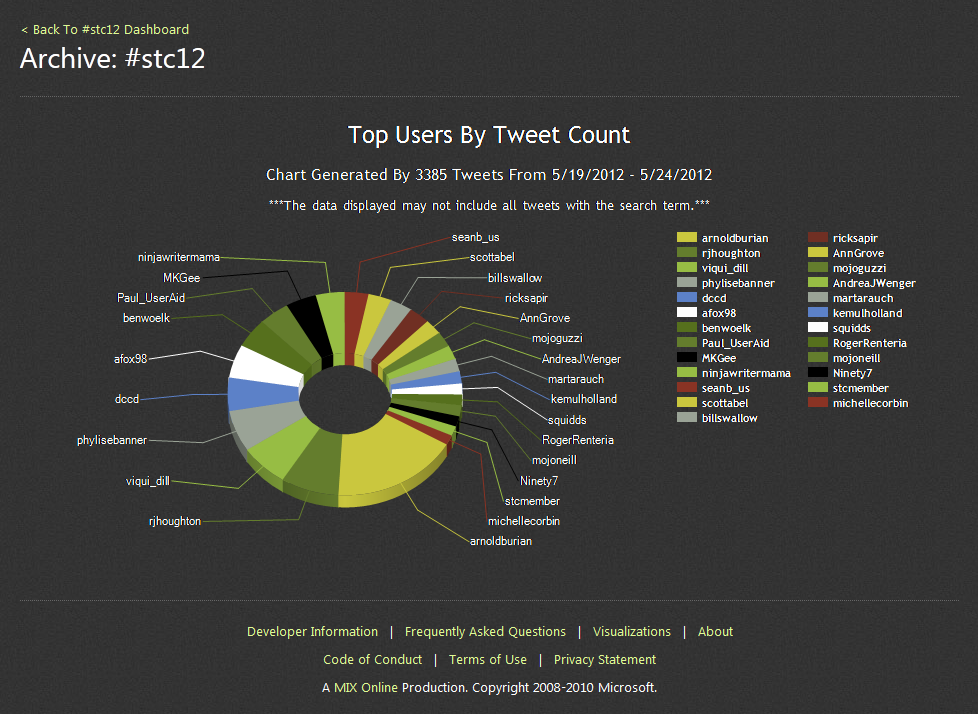 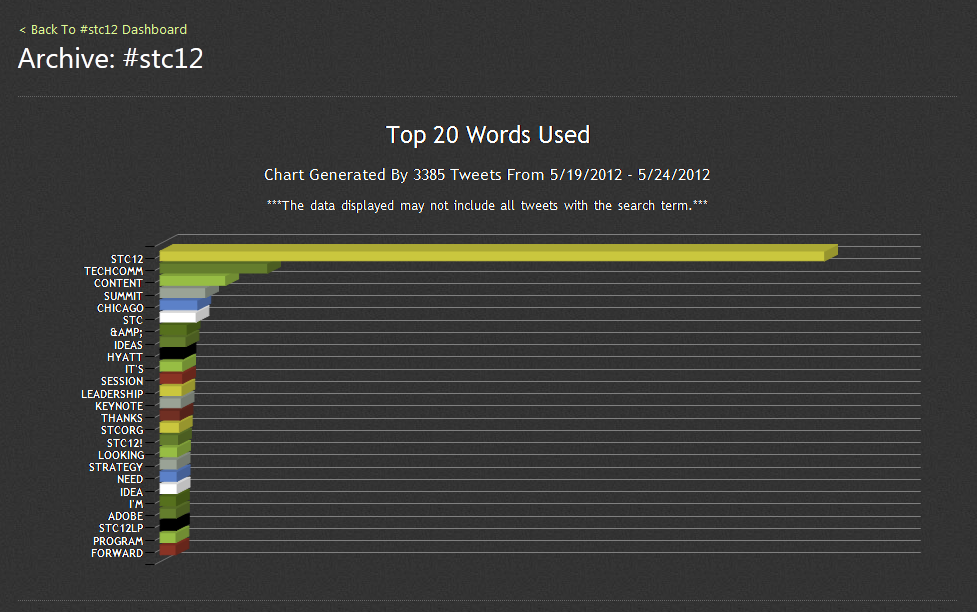 This year saw a number of new people “leading the way” with tweets. (Some of the usual suspects were quite busy behind the scenes, contributing to their drop in tweets. Of course, it’s also possible they were doing F2F networking!)

The week previous to #STC12, I attended the EDUCAUSE Security Professionals Conference (#sec12). The tweets at #stc12 far outnumbered those at #sec12. In my experience, security professionals are reticent about using social media. That may have been a factor in the difference.

If any of you are interested in doing a more thorough analysis of Twitter use at #stc12, let me know and I’ll send you Kevin’s document containing more than 500 pages and 87K words!

Let’s hear from you!

[…] the conference.Before I finish, Ben Woelk posted an entry discussing the statistics regarding Twitter Use at #stc12. It is his second year writing about how we use Twitter at the STC Summit. You can check out his […]

Wow, am I embarrassed! I hope folks found my tweets useful, at least.

Ben, thanks for putting this together. I’d love to have a copy of Kevin’s Word doc. STC should put together an ebook of the tweets from the days of the conference, if that’s possible. There’s an enormous amount of knowledge there that will disappear after a few weeks otherwise.

Andrea,
Don’t be embarrassed! You were only that high because @afox98 and I were too busy behind the scenes to pump out a lot of tweets, and Tony didn’t make the conference!
Ben

[…] and consistently used the #stc12 hashtag. My friend and STC super star Ben Woelk aptly discusses Twitter Use at STC Summit. I especially like the graphic portrayal of #stc12 information. I enjoyed Ben’s presentation […]

Oh man, I wasn’t even top 12 this year. But yes, I was doing a lot of behind the scenes stuff where I couldn’t tweet. Great analysis again, Ben – thanks!

Alyssa, you might not have made the top 12 twitter handles, but you show up prominently in the graphical representation word cloud!

Alyssa,
You’re always Top Ten in all our books!
Ben

I’ve been using Twitter since June 2008, right after the 2008 STC Summit in Philadelphia, PA. I think I may tweet more during conferences, but I do regularly tweet on subjects of interest. I am surprised at how high up I am in some of these charts though – I could have sworn others tweeted more than I did! 🙂

Ben, is it possible to pull a keywords list that excludes the 12 you mentioned? I’m sure most of us are interested in the actual content of the tweets, and not the repeated use of hashtags or “It’s” 😉

Tony,
I’m sure it can be done. Kevin stripped out common words when he created his Wordle. However, that left mainly Twitter handles. They’ll need to be stripped out as well. If you want to give it a try, I can forward you Kevin’s msword doc. (I won’t be able to dig into it for another week or so.)
Ben

I agree with Tony. The number 5 word was odd – I’ll bet it comes from converting somewhere along the long. The ampersand gets transformed into its HTML version!
The really frustrating thing is that you cannot see the 4601 tweets on The Archivist.
I have a lot of tweets (not 4601) in my Google Reader, but I cannot extract them. That is, I don’t know how I can extract them. There is no easy button for it.
I’m really surprised Twitter isn’t more helpful is letting people get at the archives. What started out as a simple chat tool for the office is turning into a real treasure-trove of information. There’s money in that! Maybe they need a technical communicator to tell them that. 🙂

Kevin’s doc should be helpful. I’ve saved out the rss from Google reader in the past but it was tedious with a much smaller number of tweets.

How did you grab the contents of the RSS, Ben? I’m very curious.

Karen,
I need to review my notes, but I believe I summarized the process in my post two years ago. It was a bit painful.