I attended RIT’s Faculty Institute for Teaching and Learning this week. Mark Greenfield, SUNY Buffalo, delivered a keynote on “Born to be Wired: Technology, Communication, and the Millennial Generation.” There was a lot of useful content, and I encourage you to follow Mark Greenfield on Twitter (@markgr) and check out his resources posted on Delicious.
Among the many things Mark discussed was the ongoing issue of Facebook privacy settings and how difficulty they are to administer properly. He shared Rob Cottingham’s recent Noise to Signal Cartoon with us. 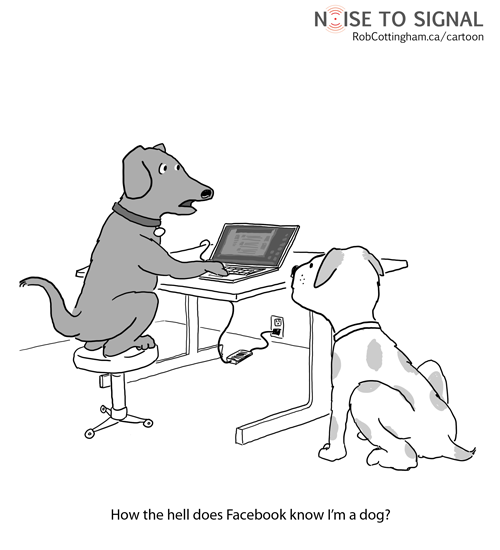 Rob Cottingham had done an earlier cartoon on the subject as well:

Rob Cottingham was inspired by the famous Peter Steiner cartoon.

Does any of this matter to you?

I can only wonder what the next cartoon will be.

Ten Ways to Shockproof Your Use of Social Networking Lightning Talk


I had the privilege of presenting my 25-minute presentation on Shockproofing Your Use of Social Media as a five-minute Lightning Talk at the STC Summit in Sacramento on May 18th.

Lightning talks introduce an additional element of stress for the presenters: the slides advance every 15 seconds whether they’re ready or not. Our audience was ~150 Summit attendees, so we were presenting to our peers as well.

It’s quite the experience sharing the stage with eight other presenters with totally different styles. Would I do it again? In a heartbeat!

Digital Self Defense for Technical Communicators, Part One

What do technical communicators need to know about information security? How do they protect both their private information and professional assets, including work they may be doing for a client? How can they leverage and use social media safely and effectively? This article discusses key security measures you as a technical communicator and computer user can take to protect yourself and others, and it offers best practices for safe use of social media. I’ll also provide examples of how we’ve addressed similar user security awareness issues at the Rochester Institute of Technology (RIT).

I’ve been creating end-user communications and developing change management materials for 16 years. I’m currently responsible for policy development and security awareness in the Information Security Office at the Rochester Institute of Technology, one of the largest private universities in the country and home to more than 18,000 faculty, staff, and students. We communicate a number of different techniques for computer users to protect themselves and others. We’ve branded our awareness initiatives as Digital Self Defense. Many of these digital self-defense techniques are useful for technical communicators, too.

Keep your computer’s operating system and applications up to date. When was the last time you updated your software? Although Microsoft Windows and Macintosh OS X can be configured to check for and install updates (also known as patches) automatically, you should check to make sure this feature is enabled. Applications are another story. Many of them have auto-update features, but again, they may not be enabled by default. In addition, some applications (Adobe and Firefox, for example) require that you are logged in as an administrator in order to install the updates. (This is less of an issue with Windows 7 because it prompts you to accept updates.) For older operating systems, such as Windows XP, some updates won’t install because you’re using an account with limited privileges (a security best practice).

Macintosh users often do not know that they should be running antivirus software. In my opinion, the Macintosh advertising campaigns have led many Macintosh users into a false sense of security. We see this every fall at RIT when new users arrive. The RIT Information Security Office has investigated incidents involving compromised Macintosh computers several times during the past year. Not only is malware (malicious software) being developed to target Macs, users may also receive Windows malware in their mail and pass it on unknowingly to Windows users.

Several companies offer free versions of their antivirus software for Windows and Macintosh computers. AVG and Avast are two well-known programs. Do not use more than one antivirus program on your computer because they will probably interfere with each other.

Install anti-spyware. Spyware tracks your browsing habits and reports the information to an external party. It’s possible for a computer user to host hundreds or even thousands of spyware programs. Antivirus software may not detect spyware, so it’s necessary to use an anti-spyware program.

There are several free anti-spyware programs available for Windows computers. Spybot Search & Destroy, Microsoft Defender, and Ad-Aware are good examples, but note that recent versions of Ad-Aware include an antivirus component. This will probably conflict with another antivirus program you’re running.

Spyware targeting Macintosh computers is just starting to become a threat; there are few anti-spyware programs designed for Macintosh.

Use a firewall. A firewall prevents unauthorized communication with your computer. It will also help protect you against worms, a type of malware that does not need user interaction to spread. Connecting an unpatched (not up-to-date) computer to the Internet or to a network without a firewall will result in the computer being infected within minutes. The Windows and Macintosh operating systems currently include a firewall. However, they may not be enabled by default. Ensure that a firewall is enabled.

Use an account with limited privileges. If you’re using a computer that has the Windows XP operating system, your day-to-day work should be done using an account with limited privileges. A limited account allows you to run most software programs, use your email, browse the Internet, etc. However, a limited account does not allow you to install software. (To install software, you need an administrative account.) Using a limited account may prevent some malware from installing itself on your computer. Newer Macintosh and Windows 7 computers (and the much maligned Windows Vista) force you to authorize program installations, limiting the ability of malware to install itself on your computer.

Responses to the #1 topic on IdeaScale, “Consumers dictate device usage, not IT,” indicate that MANY of you believe consumers will drive smartphone adoption in Higher Education, while the sentiment around the topic, “Get rid of the walls around your enterprise data,” indicates that quite a few of you believe that core university data should be accessible to smartphone users.

However, yesterday’s polls have shown that not even all of the attendees of yesterday’s webinar use PINS or swipe patterns on their smartphones. The inherent difficulties in entering a complex password on a smartphone increase the likelihood that users will rely on simple passwords, if any, to access their devices. At the same time, users are expecting access to more and more university resources through their smartphones, increasing the risk of a data breach.

Where does security fit into this picture?

In Thursday’s webinar, “Smartphone Privacy & Security, What Should We Teach Our Users?“, the speaker, Norman Sadeh, indicated that mobile users are three times more likely to fall for phishing attempts. That statistic implies that spear phishing against university communities, which already demonstrates more success than we’re comfortable with, will be even more effective against smartphone users. As we find ourselves more and more hurried, making quick decisions just to handle the ever-increasing stream of information flowing at us, we’re more prone to fall for these attacks.

I would guess that many of us who own smartphones are using them to access our university e-mail, if not other university resources. Most of us don’t have any control over whether someone may e-mail us private or confidential information. If our smartphones become the weakest link in protecting data, they will be targeted.

How many of us have misplaced our smartphones or left them sitting on our desk in an unsecured office? Have you left your smartphone in a taxi or on a shuttle bus?

Increased access to university data is a desirable convenience. Will we be able to get the right combination of security controls, user training, and policies in place to allow smartphone access without it leading to a security breach resulting in a notification event or embarrassment to the university? What kinds of security controls are you using to prevent this? What security apps do you recommend to your users?

Lots of troublesome questions. Where are the answers?

This blog entry is part of the EDUCAUSE Mobile Computing Sprint and is cross-posted at https://www.educause.edu/blog/bwoelk/SecureMobileanOxymoron/227983


In my Cyber Self Defense course at the Rochester Institute of Technology, I teach a module on Developing a Security Mindset. Based on a class exercise by Tadayoshi Kohno at the University of Washington (mentioned in a blog posting by Bruce Schneier), the goal of the module is to reorient students’ thinking from the features of a product and how those features are supposed to be used to thinking about how someone might “hack” the product. In other words, develop a security mindset.

I ask the students to determine product assets and vulnerabilities and identify how someone might attack  the product. The students are told that they do not have resources to counter every possible threat.

I also have the students create a risk map that depicts the likelihood of a particular attack and the potential impact of that attack. Placing specific threats on a risk map helps students understand that since not all threats bear the same weight they need to choose what is most important to defend against.

The twist to the exercise is that students may not conduct an analysis of a computer-related product. For example, subjects presented by my students this quarter included Water Purification, Bicycle Safety, Running a Pizza Business, etc. As the students presented, we discussed their risk maps and the choices they made. 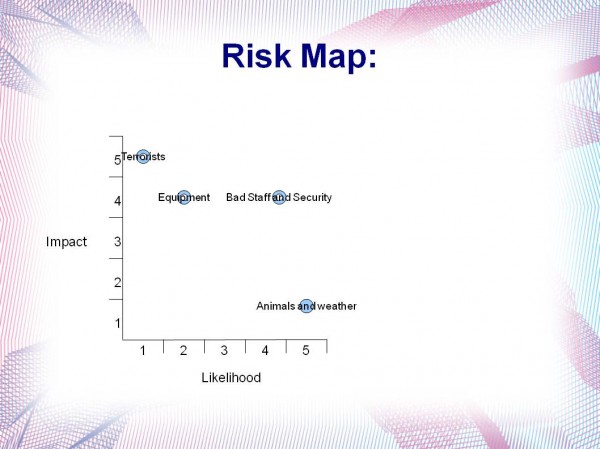 Group one risk map for a water purification plant

Although we may not agree with the students’ risk map, the exercise stretches IT students to think “outside the box.”